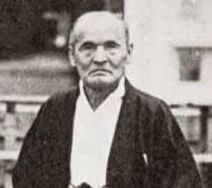 Takeda Sokaku
The oral tradition of Daito Ryu, and thus all aiki jujutsu systems including our American Yoshinkan, is that the art extends back to Minamoto Yoshimitsu (1045-1127) who developed a martial art by dissecting corpses of battlefield casualties. This art, later called Oshiki Uchi, would be passed down through the Takeda clan in secret (Minamoto's grandson adopted the surname Takeda) until Takeda Sokaku began teaching publicly in 1898. The sophistication and high quality of what Sokaku was demonstrating led to him becoming one of the most influential teachers in Japanese history, with over 30,000 recorded students over the course of his lifetime including many government officials and skilled martial artists of other arts. 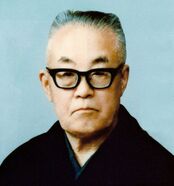 Horikawa Kodo
Horikawa Kodo began his instruction in Daito Ryu first under his father Taiso at age 11, before studying with Takeda Sokaku directly. Takeda specifically told him that he needed to master "Aiki" because of his short stature and instructed him mostly in the Aiki principles as a result. Kodo's techniques came to be known as very subtle, effective, and strong. Thus, it is said that Horikawa's Kodokai emphasizes Aiki over strength to execute the higher-level techniques. In 1930 Kodo received the Kyoju Dairi from Takeda, later going on to receive the Hiden Mokuroku and Hiden Okugi scrolls as well as his shihan license in 1931 at the age of 37. In 1950 he established the Daito Ryu Aiki Jujutsu Kodokai in Hokkaido where it exists today under the direction of Inoue Yusuke. 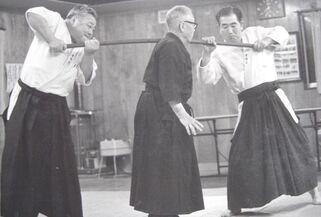 Horikawa demonstration
Hasaka Yutashi grew up in the martial arts, first learning Jujutsu from his father. Over time, he began development of what would later become American Yoshinkan Aiki Jujutsu (named in 1999), although he still remained an active student of the arts. He would go on to study Daito Ryu with Horikawa Kodo during the 1960s and '70s, as well as Yoshinkan Aikido briefly with Shioda Gozo. Shioda was a fellow student of Horikawa around 1977-78 after Horikawa visited his Tokyo dojo, and so Hasaka sensei had the opportunity to share information with him. However, although brief, Shioda would influence Hasaka sensei so greatly that his art became the inspiration for our naming. 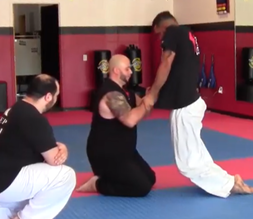 Hatfield teaching Gordon
In the 1980s, after visiting previously numerous times, Hasaka sensei moved permanently to the United States and settled in California. There, he met a young Steven Hatfield and later his step-father, William Sirbaugh. Sirbaugh was an accomplished martial artist with a background in Taekwondo, Tang Soo Do and Hankido (for more information, click here), and Hasaka sensei quickly began exchanging information and training with him. As he got older, Steven Hatfield also began studying with them full-time. Even when Hatfield sensei moved to Ohio in 1999, he would continue traveling to California and bringing Hasaka sensei to Ohio to continue his training. When Hasaka sensei would return to visit Japan, Hatfield sensei would often accompany him. 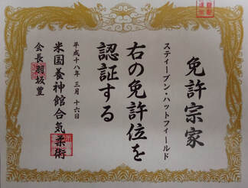 Hatfield's Sokeship Certificate
Upon Hasaka sensei's death, the art officially passed to Steven Hatfield having been designated as the successor a year prior. However, this was at a time when Hatfield sensei was primarily focused on his karate training under various teachers, and so he placed American Yoshinkan on the back burner until he met a student specifically seeking that type of training. Throughout this time, Hatfield sensei also cross-trained in Aikido under various teachers, including Jerry Barnett and Paul Linden, as well as Hankido (a Korean offshoot of Aikido) under his step-father William Sirbaugh, which would influence his personal expression of the art as he passed it on. 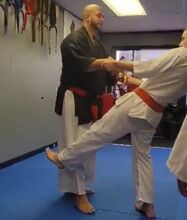 Hatfield doing Aiki Sage
In late 2011, Hatfield sensei met Bret Gordon through some mutual friends and the two began training in early 2012. Also having some prior experience in Aikido, Gordon sensei was actively interested in Japanese Jujutsu. Because of his other martial arts endeavors, Hatfield sensei set out to groom Gordon sensei to eventually take over the system. On January 12, 2020, Hatfield sensei officially stepped down as the headmaster of American Yoshinkan and appointed Bret Gordon as his inheritor. With this appointment, the hombu dojo was moved to Central Florida where it is currently located. As of this writing, Hatfield remains the Sendai Soke (previous headmaster), and occasionally teaches seminars on Aiki Jujutsu while Gordon sensei actively works to promote the art of American Yoshinkan Aiki Jujutsu.​
DISCLAIMER: The information contained above has been compiled from years of research and training. It is accurate to the best of our knowledge and verification, however as many of the events listed above pre-date the current administration's involvement in the organization we can make no guarantees as to its completeness. As we continue our study into the history of our art, new information regularly becomes available. Whenever new information becomes available, we will make it public so as to present the most accurate and complete account of our history as possible.
Proudly powered by Weebly